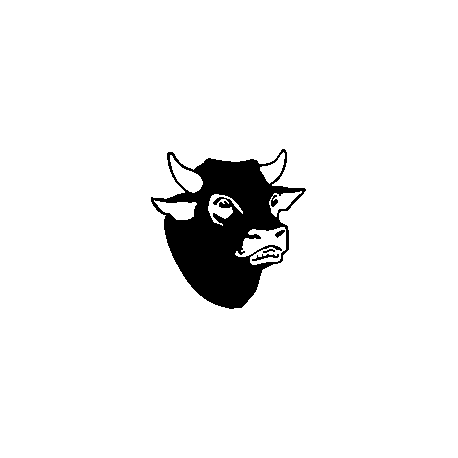 A bull is an intact (i.e., not castrated) adult male of the species Bos taurus. More muscular and aggressive than the female of the species, the bull has long been an important symbol in many cultures, and plays a significant role in both beef ranching and dairy farming, and in a variety of other cultural activities.

The word "bull" also denotes the males of other bovines, including bison and water buffalo as well as many other species of large animals including elephants, rhinos, walruses, hippos, camels, giraffes, elk, moose, whales and even crocodiles.

A common misconception widely repeated in depictions of bull behavior is that the color red angers bulls, inciting them to charge. In fact, like most mammals, cattle are red-green color blind. In bullfighting, it is the movement of the matador's cape, and not the color, which provokes a reaction in the bull.

Bulls are used in certain sports, including bullfighting and bull riding. They are also incorporated into festivals and folk events such as the Running of the Bulls and were seen in ancient sports such as bull-leaping.

Bulls have held a place of significance in human culture since before the beginning of recorded history. They appear in cave paintings estimated to be up to 17,000 years old. The mythic Bull of the Heavens plays a role in the ancient Sumerian Epic of Gilgamesh, dating as far back as 2150 BC. The importance of the bull is reflected in its appearance in the zodiac as Taurus, and its numerous appearances in mythology, where it is often associated with fertility. In Hinduism, a bull named Nandi, usually depicted seated, is worshipped as the vehicle of the god Shiva and depicted on many of the images of that God. Symbolically, the bull appears commonly in heraldry, and, in modern times, as a mascot for both amateur and professional sports teams.