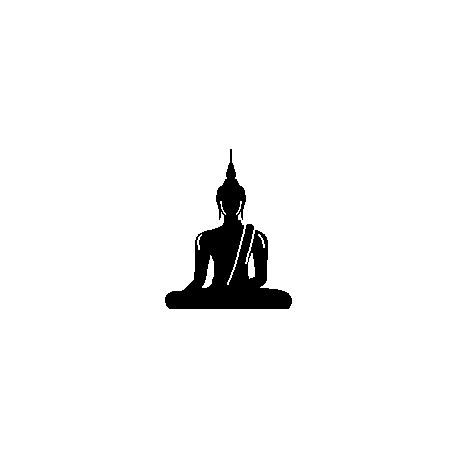 From his real name, Siddhartha Gautama, Buddha means "awake". He is the founding father of Buddhism. Siddhartha was an Indian crown prince who renounced the throne and his princely life to devote himself to spiritual search in order to find a solution to the four main sufferings of beings: birth, sickness, old age, death.

Its representation is highly codified, whatever the time or the country. There are 32 major features and 80 minor features. He is always dressed very simply, like a monk, with a kind of toga that falls into elegant folds; he also keeps from his youth as prince long lobes of ears, deformed by the heavy jewels to which he has renounced.

According to the gesture of his hands, which is called "mudrâ" in Sanskrit, he represents certain episodes of his life or symbolic attitudes. The Bhûmisparsha-Mudrā, or Mudrā from taking the land to witness. As he has just reached enlightenment, the Buddha suffers the onslaught of Māra ("the bad one"). Māra sends his armies first, whose arrows turn into flowers as soon as the future Buddha looks at them. Then Māra refuses to recognize that Buddha has reached the ultimate stage of wisdom. Sitting in the lotus position, Buddha puts his fingertips on the ground to witness the goddess-earth. It appears, pays tribute to him and, twisting his hair, extracts all the water accumulated over the cosmic eras. This water is so abundant that it carries the armies of Māra.