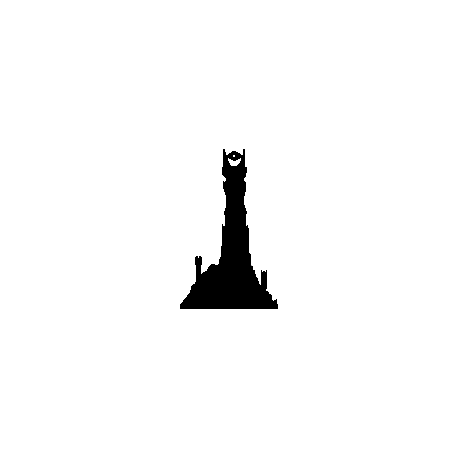 Barad-dûr ("Dark Fortress") was the Dark Lord Sauron's primary stronghold in Mordor, serving as his base of operations in Middle-earth during the Second and Third Ages.

Barad-dûr was built by Sauron in the land of Mordor, not far from the volcano known as Mount Doom. The construction of the tower began around the SA 1000, and took six hundred years to complete.

Barad-dûr fell under siege for seven years by the Last Alliance of Elves and Men during the Second Age, and was leveled after Sauron's defeat at the hands of Isildur, but because it was created using the power of the One Ring, its foundations could not be destroyed completely while the Ring itself still existed. As Isildur failed to destroy the Ring, the tower was eventually re-built when Sauron returned to Mordor thousands of years later.

Some time near the end of the Third Age, Gollum was captured and taken to Barad-dûr, while Gandalf and Aragorn were also searching for him. He was tortured for information regarding the whereabouts of the One Ring, as Sauron had learned that he had once possessed it, and thus Sauron learned that the One Ring had been found. Satisfied that he had learned all he could from the creature, Sauron allowed Gollum to be released in TA 3017.

Only when Frodo Baggins (with the unwitting aid of Gollum) destroyed the One Ring, the Tower was finally brought down. Without Sauron's power from the Ring to sustain it, it could not stand. The moment the One Ring was cast into the fires of Mount Doom and was unmade, Barad-dûr collapsed into ruin, never to be rebuilt.