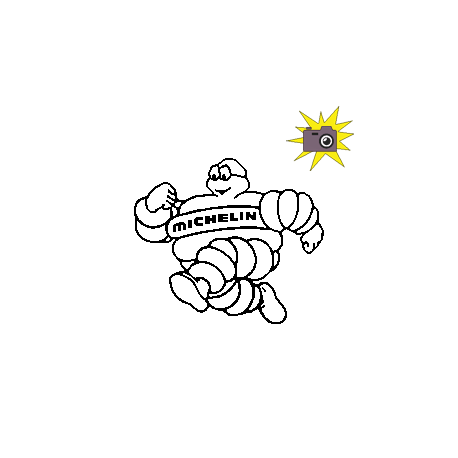 Bibendum was born in 1898. The first drawings are quite simple, Bibendum is then a colossus with strong corpulence entirely made up of fine and very numerous tires.

In the 1910s he won a mouth with lips and now has a very broad smile.

In 1923 Michelin released its new 'comfort' tire. Tires are bigger to better absorb shocks, increase handling and support the weight of cars. Due to this evolution, Bibendum lose its numerous rings in favor of bigger and less numerous folds. His glasses round out, his body is no longer oversized: he displays new curves.

In 1926, Michelin decided to create its own studio and no longer call on independent artists for its advertising. The image of the Bibendum becomes institutionalized and standardized, the Bibendum respects the graphic codes defined by the internal agency, reinforcing its popular recognition

Excepted Raymond Savignac poster series in 1965, the figure of Bibendum will fade between 1940 and 1980 for the benefit of the product and technology. The Bibendum will no longer take center stage. The Bibendum appears on the logo of the brand with two key periods in the drawing: first the period of the Bibendum with the hand raised always associated with a tire between 1950 and 1960 and the go-getter Bibendum between 1970 and 1998.

On the occasion of the centenary of Bibendum in 1998, Michelin made another makeover; the character is more slender, it is refined and loses its roundness in favor of a decidedly sporty style that rejuvenates the character.

Since the end of the 90s and with the help of the new technologies the transformations are done more quickly. The firm gradually abandoned the pencil, the Bibendum is no longer systematically drawn but filmed digitally and the image subsequently worked to serve in different media. Since 2005, digital modeling is gradually used to create the 3D character that we know today and which accompanies most commercials.