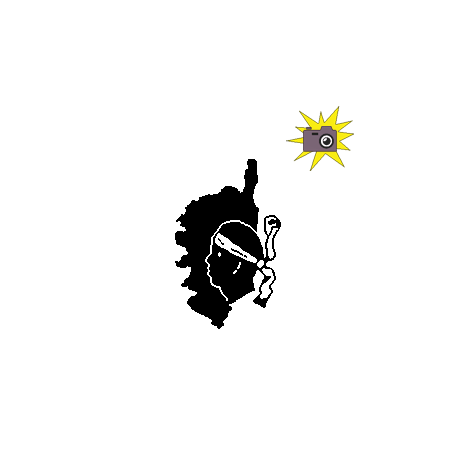 Pattern in French, ask me if you want it in English.

The Corsican flag is the only emblem (with the Sardinian flag) to include a human representation.

During the High Middle Ages, two events are to be considered: on one hand the expansion of Islam and Muslim civilization, and on the other hand the rise of Christianity and its civilization throughout the West. The Iberian Peninsula has been the favorite theater of clashes between these two civilizations.

This clash will last seven centuries, made of alternative advances of Christianity or Islam. It is the emergence of two Christian powers, the kingdom of Castile and the kingdom of Aragon, which will favor the eviction of the last Moorishes expelled from Spain in 1492. In order to symbolize this conquest, from the 12th century, lords Christians display on their banners a head of a decapitated Moorish (the head was most often represented blindfolded, an additional sign of infamy).

In 1297, Pope Boniface VIII cedes Corsica to the king of Aragon James II, although it is only in the 16th century, under the reign of Charles V, that the island will be partly invested by the Spanishes. It is very likely that the Moorish banner began to spread in Corsica thanks to the Spanish presence: the symbol must have marked the local population who had suffered violent Moorish incursions for centuries.

In 1573, the geographer Giacomo Mainoldi Galerati was commissioned to create a banner for Corsica and decided to depict a Moorish head on a white background.